For a band that has only been officially around for about two years, Kassassin Street is an energetic group brimming with confidence.

The Southsea, UK rock troupe is a lively and cool bunch, whose eccentrism never distracts from how skillful the group is. Since their 2014 release “The Royal Handkerchief Ballet,” Kassassin Street has been setting alight the indie rock scene with a fun and tight brand of psychadelic rock. Describing their sound as “normal rock just with reversed guitars and a lot more paisley” (before joking around about how everything except the lead vocals couldn’t be reversed so they had to “tone it down a bit” because the result was so funny), the band describes perfectly just how much their energetic nature leaks through in both personality in sound.

Kassassin Street is a band who just seems to be naturally cool and stylish, so much that they don’t even need to try to look great at what they do. In Song Bird’s exclusive interview with the band, Kassassin Street talks about their name, how musical personality is like cookies and biscuits, and the growth of the band since their debut.

SongBird – Describe your band and what you do in ten words or less.

SongBird – We’ve known you for awhile and have already done some coverage, but just for our readers who aren’t exactly familiar, how long has Kassassin Street been around?

Ryan – We’ve always been playing music together since we’ve known each other, but our first official release was ‘The Royal Handkerchief Ballet’ back in 2014.

Nathan – As Ry said we’ve always been playing music together in some shape of form since I can remember. Me and Row used to jam together in school and try make as much noise as possible.

I’d say things really started to take shape when we met Andy and Tom at Southdowns College. I think together we learnt we could make a much bigger noise if there was more of us.

SongBird – How exactly did Kassassin Street come about? Also, where did the name come from? It rolls off the tongue really well.

If you’ve ever tried to pick a band name you’ll know how difficult it is. You end up coming up with all kinds of ridiculous things like ‘Sonic Earwig.’ We always walked down a road called Kassassin Street when we used to watch bands at The Eastney Cellars in Portsmouth and one day we were all like, “‘Ang on. . . that could work.” I’m glad you think it rolls of the tongue, thanks.

SongBird – What is “psychadelic rock,” and how exactly would you apply this genre to Kassassin Street?

Ryan – Psychadelic rock is basically the same as normal rock just with reversed guitars and a lot more paisley. There was a point when we’d reverse everything except the lead vocals, but gigging became impossible so we had to tone it down a bit.

SongBird – From as long as we’ve covered you, Kassassin Street has always been a very stylish band. It’s not all just sound, you all really carry this punkish, loose vibe that really just makes your sound that much easier to jam to. Is this deliberate, or just something that comes out of your collective personality?

Nathan – Ha I think I know what you mean? I’ve always associated the word stylish with scrubbing up quite nice, maybe we do, Andy definitely does!

To be honest, even in the early days when we were playing to just one man and his dog, if his dog was proper up for it, then you’ve got no excuse not to go a bit crazy.

SongBird – Is “personality” something that is particularly important with a band like this, or are you all just doing what you do?

Nathan – I don’t think we’ve ever really thought about it so I think we’re very much just doing what we do. Personality is really important though, try to think of it in terms of biscuits. Imagine watching a band where all the members are Rich Tea’s, whilst solid, it’s probably not going to be that entertaining. I reckon you definitely want a Bourbon in there, a Hobnob, Malted Milk and maybe half a ginger nut, now that’s a band I’d watch.

SongBird – Many of us here at 24Our Music, staff and readers, first heard you when the band came out with “The Royal Handkerchief Ballet.” If you can think back, what went into that song as a debut single, and how far has Kassassin Street come as a band since then?

Nathan – When we made that record, it was the first time we’d used a proper studio, plus we had a good friend and top all round music person Tristan Ivemy producing it. It was a really fun and optimistic time. I think that optimism went into the record and ultimately came out in the sound of it.

Since then we’ve just kept at it, we’re still making music we love and pushing really hard. The only thing that’s changed is that crowds have been getting bigger and we’ve had the opportunities to keep playing our songs further away from home. 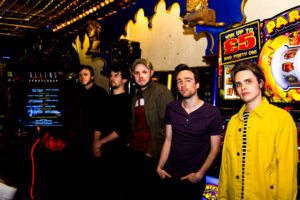 SongBird – Amongst your more recent singles, “Hand In My Pocket” definitely has a more dancey vibe to it. What went into songs like this compared to your other works?

Ryan – I think with that one Row was just messing around with an arpeggiator and the song kind of just fell in to place. The rough demo then got passed about a bit and we all added a few ideas and then out of nowhere the track was done. It was different because we had the recording before we’d even played through it as a band.

SongBird – Any major releases coming up in the horizon, as well any major tours?

Ryan – We’re currently assembling a load of new tunes together and will be looking to start recording them very soon. We’ll be touring again in November, and any new releases are going to coincide with that when it kicks off.

SongBird – What does Kassassin Street mean to you?

Nathan – I’ll refer back to your first question, party! Everyone is welcome to come and join it!

SongBird – One last question, and it’s pretty serious, so get ready. Our readers really need to know: if the other members of your band became dessert treats, what would they be?

Nathan – Our band don’t really do desserts so I’ll adapt it to Indian cuisine. I think Andy would be a Jalfrezi, Row would be a bowl of Saag Paneer, and Tom would be an Onion Bhaji with a sparkler in it.

SongBird – Thank you Kassassin Street for your time, we’re looking forward to hearing more from you all!

Thanks very much, always appreciated!