Zach Caruso is a musical journeyman, a fifteen-year veteran who has had his fair share of spotlights and big crowds. He has left his mark in some of the biggest east coast venues, including the Hard Rock Cafe in Philadelphia, The Stone Pony in New Jersey, and Webster Hall in New York. It doesn’t hurt to have a bachelor’s degree in journalism and a master’s degree in writing. Combining a cool and poised bluesy rock flair, Zach Caruso is a steady talent who offers a satisfying listen. 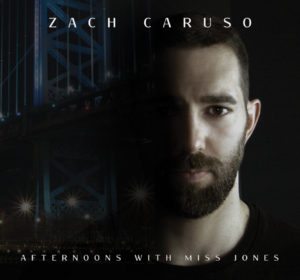 His recent EP, Afternoons With Miss Jones, is just another mark of Zach Caruso’s musical adventure. Featuring the lead single “If Only, Anna,” a track dedicated to movie star Anna Kendrick, Caruso sings from a place with the goal of charming and putting a smile on your face. Putting together warm lyrics with folksy, summer-laced guitar work, “If Only, Anna” is a sweet ballad that shows off Caruso’s career and his knack for singing from the heart.

Caruso has a wide and varied catalogue of music, along with his quirky little love song to Kendrick. “Hang Fire,” also from his new EP, has a big band flair to it that is compounded beautifully by the romp of a blaring trumpet. “Rusted Cage” meanwhile has a cool swagger to it that has the sounds of Red Hot Chili Peppers and The Black Keys, its entire soundscape balancing gracefully between head-bobbing live music and coffee shop ambiance.

It all comes together for Caruso and rings aptly, combining an easy going personality with some a nice musical mix of sweet and sultry. Experience builds character, and after fifteen years, with Zach Caruso, it shows.

Sky Jonez is Ready to Soar