Sky Jonez is Ready to Soar

“Things gotta change,” Sky Jonez sings on his newest album, something he is ready to make happen with his own hands. 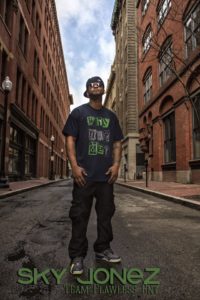 Hailing from Woonsocket, Rhode Island, Sky Jonez is a slick and stylish rapper with smooth rhymes that feel velvety over tight beats. Born originally in Brooklyn, New York as Albert Martinez, Jones channels an undeniable swagger that combines the fashionable pomp of Jay Z with the lyrical precision of Kendrick Lamar. His craft is what allows him to carry his story, an upbringing that demonstrates how musical intelligence can be bred from hardship.

Despite moving at a young age out of Brooklyn to the sleepy little city of Woonsocket, Jonez could never find peace, dealing with a mother and a stepfather who abused drugs. It was enough to push Jonez to flee his home, getting mixed up with the wrong crowd and getting into his own trouble. But rather than succumbing entirely to the life of a vagabond, Jonez found an epiphany, realizing that he was capable of turning his life around and conquering his hardship in more peaceful and less destructive ways. He found music.

His trade is masterful as it is genuine, combining all the best of today’s hip-hop kings without being neither too deviant or too conventional. One moment you will be feeling inspired while jamming out to “Things Gotta Change” before reflecting on your life through introspective tracks such as “Good Enough.” It’s a fantastic musical mix that shows just how many walks of life Jonez draws inspiration from, doing what any good artist should do and combining skill with story.

His newest album, Controlled Chaos, is a just another mark of how far Jonez has come as both a person and an artist. It’s a fantastic record that brings out both the musicality and personality of the east coast product, with an artistry that is exciting as it is exquisite. Sky Jonez has an epic story to tell, and it’s waiting for you to listen.